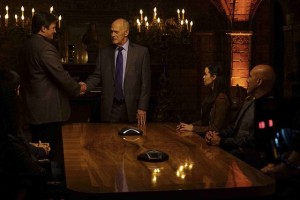 – The scene in the Korean resturant was very funny especially with the owner trying to get them to eat, pushing menu’s into their chests.

– Some movement on Castle missing time with the watch

– Loved the scene when searching the directors house, Castle. He key his look in a door mirror.  LMFAO

– I liked that Hayley was hired by Castle’s father, makes more sense why she hangs around

– Great scene where Kendall picks Rick’s pocket, Mason asks if he knew, Rick admitting it was a bogus address and Mason saying she would be pissed

– Lanie getting last laugh on those two jokers

– And for him to say he already works for the greatest detective.

– Glad they had Castle push to find out what happened 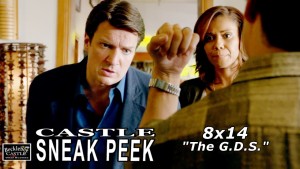 – No mention that Beckett even existed

– Alexis is now a computer genius?  Possible Hayley trained her?

– The murder, which could have been great, felt weak and secondary to everything else.

– It should have been a Beckett-Castle “I know who the killer is moment” when Rick sees the marked up screenplay. Two weeks in a row they missed that. 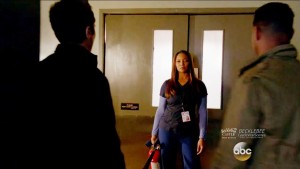 – Not one mention of Beckett? No explaination of her absence?

– So that ADA, Marcus Weller did not last long with Lanie, did he?

– Speaking of that, why does Castle trust Hayley, makes as little sense as Beckett trusting Vikram

– So how does Rick go from failing PI to GDS? 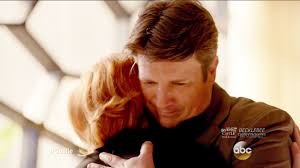 STUFF I MAY ONLY CARE ABOUT:

– Another episode without Beckett?  So Kate runs off to LA in season 3 episode 22 to investigate Royce’s murder and so Castle made sure he tagged along.  Castle goes to LA and Beckett is no where to be found, very disappointing

– I agreed with Lanie on getting the backround check after Marcus turned into such a jack hole.  I wonder if Beckett told Lanie about his actions?

– Ok so for seven seasons they have told us that Beckett likes the weird ones. Bi- coastal murderers and missing body parts and no Kate?

– How much fun would it have been for Beckett to be in on the getting back at Espo and Ryan.

– How could there be absolutely no explaination of Beckett’s absence.  At least in Cool Boys they said she was at a conference

– This episode did further the Loksat storyline, gave it some meaning, reduced the chance Hayley is a bad guy, put Jackson Hunt back in play and even better, means Castle has a reason to help Beckett especially if he and Hayley find the airplane and bulletin 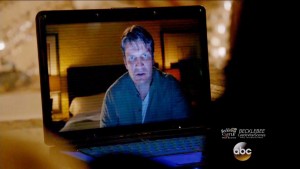