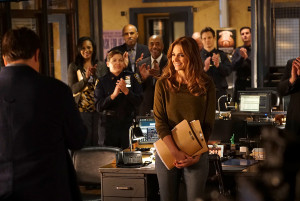 As I get ready to see the first new Castle in eons, I just KNOW you want my perspective on the season so far.(insert smiley face).

Let me say it immediately, this season is much better than season 7. There I said it.  I know I am in the minority, hey even my wife sides with those who are pissed at this season.  But alas, I disagree.

With season 7 ending as if it were a series ending,the team had to jump start 8.  I thought opening with a two parter that had a his and hers theme was both unique and clever.  Granted, I did not like that it opens with a lie from Kate (again).  But it did set up some excellent intrigue (I still want to know what happened to the bracelet).  I always mark out when Castle shows his unabashed love for Beckett.  I also really enjoy seeing the Castle dark side.  From her perspective, getting the real detective (err Captain) Beckett back was awesome.  I really enjoy the episodes that she gets both physically and emotionally stretched to the point of breaking.  Stitching herself up was real bad-ass too! Many were disappointed by the ending of episode. 2 but not me.  The writers gave us enough clues that we should have expected this twist.  We know she can not let injustice go unheeded, so she went the theatre for McBride and company. Bracken clued us in to how she is wired,  Castle called her out about seeing her this way before. Rita tied the bow on it for us at then end,just like the other times, she would leave Castle to handle business and bring justice to the victims.

The next two episodes were a bit of a disappointment after the rocking start but they did also deliver some good plot advancement and did start to show Beckett’s love for Rick and her resolve in staying away being challenged. It also began to turn Vikram into someone we should mistrust.  My problem with these two were the corny bits were not very funny.

The Nose will go down as a top 20 episode if I ever get around to ranking all the episodes.  It was funny,entertaining,  good plot, a heart wrenching scene and a promise of hope we had been looking for at the end.

Of course, that momentum got ruined when Kate was not even in the next show. Please,don’t get me wrong, Stana  absolutely deserved the time off for Milan, and I would encourage she get a couple weeks every season off if she would stay with the show for its lifetime. But, they could not shoot a couple scenes a week later and edit them in, like from the convention or whatever?  Maybe they should have flipped episodes 5 and 6?  I mean I love the Slaughter character and would be open to his appearance again, but aside from a couple of sage pieces of advice, the plot was way too convoluted and not very comical.

Now if The Nose segued into The Ladt Seduction, wow, then we could have gone into hiatus on a very strong trend.  This episode was outstanding from the Castle romantic gesture to Beckett softening to dinner to the Spa folly to the Divorce attorney to the hook-up.  Everything every Castle fan wants in the show. Episode 8 had a hard time keeping up, but delivered us into the middle third effectively, setting up the Loksat storyline effectively,  making Vikram more suspicious, Castle finally growing a pair and confronting Beckett, to the eventual reconciliation.

I enjoyed this first triad very much and am waiting for the DVR to capture enough of the Tone Dead so I can fast forward thru the commercials.

Since we all like to rate things, I will provide IMDB ratings Versus mine