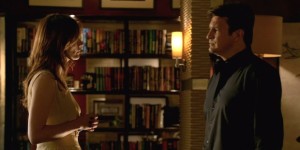 Castle and Beckett investigate the murder of a cruise ship entertainer, only to find themselves trapped at sea with the killer.

– Martha and Alexis preparing to console or congratulate Rick

– Martha calling the PI business what it is, a money pit

– Beckett getting pissed at Vikram for texting her the previous night

– Nice touch showing the 8-ball being pulled out

– Loved the line “Unless she tripped and fell on a bulletin”

– Did Vikram really match the heroin or is playing Beckett?

– You know Castle just HAD to do his Titanic impression

– The boat leaving the port

– Made perfect sense to get to international waters as just about every cruise ship is registered somewhere other than the U.S.

– Beckett saying they can buy a boat for the second anniversary

– 60 minutes to solve the murder, divide and conquer!

– Beckett saying that there are three Marthas on Lido deck. If anyone knows anything about this ship it’s going to be them.

– And one smokes weed

– and Isaac the bartender giving his alibi with disdain

– Liked that Acosta lawyered up and that it is a public defender that won’t back down from Beckett.

– Beckett acknowledging how much fun the had in the ship

– Vikram telling Kate the video had nothing to do with the heroin, hmmmmm sure looked carefully packaged. Smells like a con job by Vikram

– Verbal jousting in order to get Beckett’s Ip location

– Round two of the jousting with Beckett returning the favor even better!

– Passionate Castle facing off against Beckett in her office, excellent much needed scene this season, and his reminder to us all of what really drives Beckett into the rabbit hole

– The co-conspirator had to get shot and killed, right?

– Beckett realizing her world is crashing around her.

– Brown may be a major player or a pawn being set up, intriguing

– Vikram, I believe, really wants to break up Beckett and Castle

– Lucy as a sounding board was priceless

– Beckett coming back to Rick ending their private separation

– The secret lair is a strip club?  So Kate  can find an apartment across the street from Castle’s loft but Vikram can only find a strip club?

– So three women pushing Castle around was not enough, now Hayley bosses him around too?

– Vikram is a dick

– Jazz hands (again?).  The song and dance number rivaled Slaughter and him (episode 6) for which was worse

– Our Vikram? When did Rick get so cosy?  I remember a severe distrust in episode XY.WIt Rick recovered by saying “I never liked that guy”

– Beckett absolute trust in Vikram, she will be sorry!

– I repeat Vikram is a dick

– Naked punishment? She comes back hat in hand and you use the word punish after wearing your heart on your sleeve for 8 episodes?

– So Kate told Castle she had to go, went to get dressed when the text came in so Vikram really didn’t prematurely end her anniversary

– Kate solo on the investigation, then chases the perp without backup

– So let me get this straight, Castle will not buy a house Oceanside but will buy a boat?

– But you are lying for the right reason?  And Kate buys it?

– When they corner the garbage truck driver, Vikram is all of a sudden a tough talking,gun slinging,bad-ass.  He sure knows how to handle a gun now!

– Gee when they get to the warehouse it was empty. Shocked!

– Once again,almost on queue, Vikram tosses another crumb Beckett’s way with the dirt on Caleb Brown.

– My take is once Beckett stumbled across Loksat’s heroin, Vikram upped the ante in this game to keep her chasing the carrot

STUFF THAT ONLY I MAY CARE ABOUT:

– Is it me or does Beckett look facially different, thinner, older, worn?

– Even though it was the right call to have Ryan and Espo kill Longarzo,

you have to feel bad for Beckett to be so close but yet so far away.

– it just smells like Vikram is setting Beckett up

– Castle and Beckett’s reconciliation is one of the few times she has called him “Rick”.  You take notice whenever she does

– Beckett is always having to come back to Rick apologetic and contrite and admitting wrong doing.

– This episode takes place the morning immediately after the events of Castle: The Last Seduction (episode 7) as per Beckett’s mention of the bogus text

– In the Goofs section of IMDB it says Beckett and the ship’s captain say that in the hour it would take the U.S. Coast Guard to respond to stop the ship, the ship would be in international waters and outside U.S. jurisdiction. However, the U.S. Coast Guard has the authority to stop, board, and detain American ships anywhere in the world, including in international waters. A ship’s captain would know this.  The problem is, it is very rare for a cruise ship have an American/U.S. Registration or incorporation so Beckett’s assertion was correct

– To prove the previous point, The Titanic-themed American cruise ship is called the R.M.S. Bentley. The “R.M.S.” prefix stands for “Royal Mail Ship,” and is only carried by British-owned ships that are contracted by the UK government to carry Royal Mail deliveries.  So, the ship is internationally incorporated.

Kate Beckett: [investigating a murder on a cruise liner] Are we moving?
Richard Castle: Beckett, I think your crime scene’s making a run for it.

Vikram Singh: [on the phone with Beckett, having discovered a direct link between the current case and LokSat] Good thing Castle’s nowhere near this one.
Richard Castle: [standing on a rail on the deck above Beckett] Ahoy! I’m the king of the world!
Vikram Singh: [Beckett lowers her phone, unnerved that Castle is there] Hello? Beckett?
Kate Beckett: This isn’t happening.

Kate Beckett: There are three Marthas on Lido deck. If anyone knows anything about this ship it’s going to be them. And plus, they’re not with the crew.

Richard Castle: All right. If they’re anything like my mother you’re going to have your hands full.

KEVIN RYAN:Yeah, have you starting jarring artisanal pickles yet? (he gestures to the beard)

Kate Beckett: Did you text me to pull me out of my anniversary dinner with Castle?
Vikram Singh: Look, you broke up with him for a reason. No one can know what we’re doing, especially Castle. It’s too dangerous.
Kate Beckett: I know. And I am being extremely careful. I’m just trying not to lose my marriage in the process.

Janice Elden: Here at Iconic, we pride ourselves on two things: the old world elegance of ocean travel and our impeccable safety record. So I’m sure whatever happened to Lara was simply a tragic accident.
Kate Beckett: Uh, well, she was shot in the head, so unless she tripped and fell on a bullet, it wasn’t an accident.

Kate Beckett: Hey. Get anything?
Richard Castle: [pretending to be a professional dancer] A pulled groin and a potential clue.

Richard Castle: You know, when I hung up my shingle as a P.I., I knew I’d have to follow some wives. I just never thought it’d be my own.
Kate Beckett: Castle, why couldn’t you just trust me?
Richard Castle: How can you ask me that? I saw the text Vikram sent you last night. I thought you were in trouble. Instead, I find out you’ve been lying to me.
Kate Beckett: I was trying to protect you.
Richard Castle: From Allison Hyde’s killer? Yeah, it was easy to figure out once I realized you weren’t just looking for “me” time.
Kate Beckett: LokSat thinks that his cover-up worked. That’s why he let us live. And if he finds out that I am still pursuing this, he will kill me and anyone that I am close to. That’s why I had to push you away.
Richard Castle: The fact that you even think that breaks my heart. I’d walk into a tornado for you, Kate.
Kate Beckett: And I would die if I lost you.
Richard Castle: You want to know what hurts the most? You could have come to me with everything, broken us up just like you did, only it would have been a cover. And together, in secret, we could have taken this guy down. Only that thought never even occurred to you, because deep down inside, you like being broken, and you need this obsession. And no matter what I do, I can’t change that. Only you can, Kate.
Martha Rodgers: Richard… Look, regardless of what Katherine is doing and why, are you sure that you want to do this? Because if she finds out that you are spying, you may just have crossed a line you cannot uncross.

VIKRAM: Everything all right?

VIKRAM: Well, normally he’s a lot weird, so – (off BECKETT’S offended look) – in a charming kind of way.

Kate Beckett: Did they get in?
Vikram Singh: No. Another second and they would have. Thankfully, our location and all our files are still safe.
Kate Beckett: Yeah, for now. I just hope I didn’t nuke my marriage.

LUCY: I thought you said lying is wrong.

CASTLE: I did. It is. But … she thought she was protecting me.

LUCY: Okay … so does that mean you can forgive her?

LUCY: Yeah, don’t take this the wrong way, Rick, but you don’t make any sense.

CASTLE: (sighs) Well, that’s because I’m in love. But … you wouldn’t understand that.

LUCY :So why are you talking to me about it?

I loved this episode as you can tell with the over extended update. It did leave me with a lot of questions but also made me dread the long hiatus.

One of the best episodes of the season so far. The murder investigation was relatively routine – we’ve seen how many gunshot victims in eight years? It’s become so common, it borders on cliché – but the locale was an interesting choice, and the connection to LokSat was a nice touch. Did anyone else see that coming as soon as Perlmutter pulled the 8- ball of heroin out of the vic’s mouth?

But what really struck me was the relationship between Castle and Beckett. Nathan and Stana have had a great chemistry for the past eight years, but it always seems to soar when Rick and Kate are at odds, especially when he calls her out on what he sees as irrational decisions or behavior; their blow-up arguments in ‘Knockout’ and ‘Always’ are also prime examples. And their scene in the interrogation room is no different. One of Castle’s best scenes since his profession of love for Beckett in ‘Always’, and one of Beckett’s best since her You’re wrong” speech at 1PP in ‘Hollander’s Woods’. It’s a bit disappointing neither of the leads have been nominated for Emmys yet. (Nudge, nudge, wink, wink)

And it was nice to see them finally reconcile their marriage. There was never any doubt in my mind that they would; in the three years they’ve been together, it’s been crystal clear to me how much they truly love each other. The separation story was simply a plot device to give them an obstacle to overcome; it’s like Castle says in ‘For Better or Worse’: theirs is a great love story, and what’s a great love story without trials to overcome, that only the worthy can transcend?

All in all, it was a satisfying end to the first half of the season. Which begs the question: if that’s how part one ends, what the hell is in store for part two? I for one cannot wait! 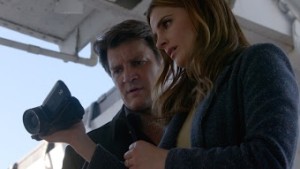